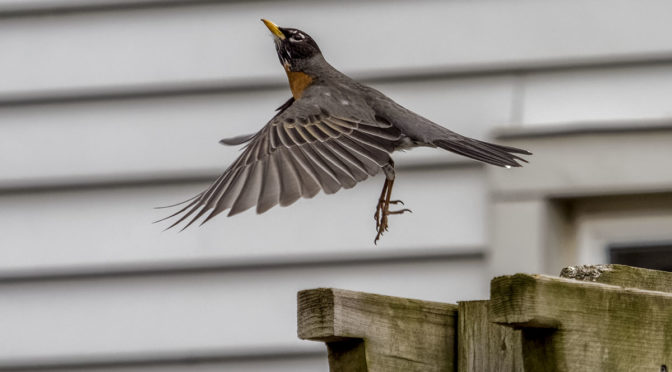 Our first example is of a blue jay taking flight to avoid an advancing squirrel.

As we examine the photograph above we can see some key factors that help us anticipate the most likely flight direction of the bird. On the blue jay’s right, its flight path is obstructed by a bench railing as well as some branches from some trees. This makes an exit flying to the blue jay’s right unlikely.

If you read the original article in which this image first appeared, you would know that a squirrel was advancing directly at the blue jay. This would make an upward or backward flight launch also unlikely as the blue jay would still be directly in front of the squirrel. Birds typically take the most direct flight path to avoid danger.

The quickest and safest exit for the blue jay would be to take flight to the blue jay’s left. As we can see in the following three Pro Capture H images, that is exactly what happened.

The body and head position of a bird can give us good information when anticipating flight direction. Let’s look at a photograph of a robin preparing to take flight.

The robin is perched on the top of a gate gable in my neighbour’s backyard. It is in a pre-flight crouch with its head pointed sharply upward. This gives us a very strong indication that the robin will be flying in an upward direction. In the local environment the only target landing spot for the robin would be the roof of my two storey house. The next 5 photographs in this Pro Capture H run show us what the robin did.

Let’s compare the body and head position of another bird that was featured in a recent article of a robin taking flight.

The body and head position of the robin in the above photograph is very different than in the image run that immediately preceded this one. The robin in the photograph above is preparing to launch with no obstructions near it, and with no immediate threats. Its body and head are aligned and pointed straight forward. So, when anticipating flight direction for this bird we would assume a straight forward path. As the following photographs demonstrate, this is the direction taken by the robin.

Unless a bird is watching a perceived threat, both its body and head are usually aligned and pointed in its intended flight direction. The angle of the bird’s head will give us a good idea of its flight angle. Prior to taking flight some birds may defecate. Some sort of crouch or leg flexing will precede a bird taking flight.

When anticipating flight direction two other factors need to be considered, the environment and habitual bird behaviour. Like many animals, birds are creatures of habit. They will often have favourite perching sites and flight paths between various elements in their local environment.

For example, if you have bird feeders in your yard the birds that frequent them will typically fly in from roughly the same angles, and from the same positions on fences, pergolas and other structures in your yard.

Let’s take a look at some images of a mourning dove. If you have this species in your yard, you’ll know that it doesn’t land on bird feeders. It prefers to eat the seeds on the ground that other birds have dropped from feeders.

As I composed this Pro Capture H image run, I anticipated that the mourning dove was going to fly towards the ground to feed. I tried to leave sufficient room for the upstroke and downstroke of the dove’s wings as it took flight. Let’s have a look at the next 8 images in the Pro Capture H run.

Prior to taking flight some birds may look a bit agitated or anxious. Others may raise their head up to scan immediately around them. This is fairly common with birds like ducks that often take flight from a water surface.

By keeping these simple pointers in mind, anticipating flight direction may be easier, and will hopefully result in more appealing images of birds-in-flight.

Technical Note:
Photographs were captured handheld using camera gear as noted in the EXIF data. All images were produced from RAW files using my standard process.

How you can help keep this site advertising free
My intent is to keep this photography blog advertising free. If you enjoyed this article and/or my website and would like to support my work, you can purchase an eBook, or make a modest $10 donation through PayPal. Both are most appreciated. You can use the Donate button below. Larger donations can be made to tom@tomstirr.com through PayPal.

As a reminder to our Canadian readers, you can get a special 5% discount when ordering Tamron or Rokinon lenses and other products directly from the Amplis Store.

Word of mouth is the best form of endorsement. If you like our website please let your friends and associates know about our work. Linking to this site or to specific articles is allowed with proper acknowledgement. Reproducing articles, or any of the images contained in them, on another website or in any social media posting is a Copyright infringement.

Article is Copyright 2020 Thomas Stirr. Photographs are Copyright 2019-2020. All rights reserved. No use, duplication or adaptation of any kind is allowed without written consent. If you see this article reproduced anywhere else it is an unauthorized and illegal use. Posting comments on offending websites and calling out individuals who steal intellectual property is always appreciated!

This website celebrates the joy of photography and features a wide range of photographic subject matter. The content is designed to appeal to a wide range of people interested in photography. The website also demonstrates the image capability of small sensor cameras including micro four thirds (18 x 13.5 mm), 1" (13.2 x 8.8 mm), and 1/2.3" (6.17 x 4.55 mm) cameras.

You cannot copy content of this page
We use cookies to ensure that we give you the best experience on our website. If you continue to use this site we will assume that you are happy with it.OkPrivacy policy