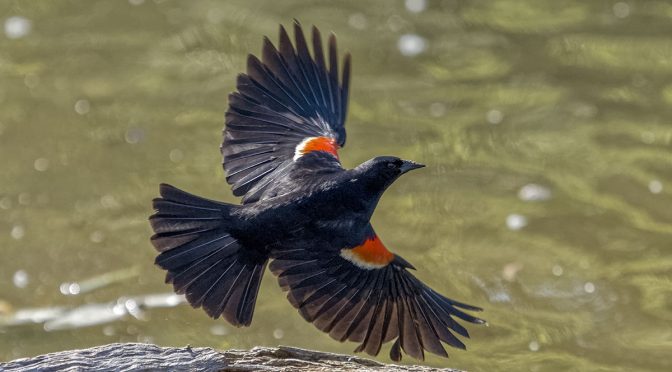 This article discusses some of the factors to consider when using landscape versus portrait Pro Capture to photograph small birds taking flight. To illustrate both orientations we have included images from two Pro Capture H runs captured at Hendrie Valley yesterday. All of the photographs are displayed as 100% captures without any cropping.

Let’s have a look at a typical Pro Capture H image run. This one illustrates a red winged blackbird taking flight from a solid surface, and shares the last 8 consecutive photographs from this image run.

When launching into flight from a solid surface a small bird will typically demonstrate a noticeable crouch position signalling its intention to take flight. In the photograph above the blackbird is already launching. In the next two images we can observe its wings completing a downstroke beat.

You may have noticed that the shadows by the bird’s feet indicate that this blackbird is backlit. This can be problematic with images of perched birds, but can be helpful with dark birds taking flight as we can see in the next two photographs.

Here is our first ‘money shot’ from the Pro Capture H image run. The backlighting has helped define various details in the bird’s wings. I had observed a male and female pair of blackbirds flying back and forth from this perching area, returning to their nest. This helped me anticipate that the male bird would bank to its right after taking flight, making the backlighting beneficial.

The photograph above is my favourite from this Pro Capture H run. When deciding between landscape versus portrait orientations for this image run, two key factors entered into my choice. The first was that the blackbird would be launching into flight from a very solid surface. This meant that it would move quickly from left to right in my composition.

The second factor was that the blackbird never looked upward. It kept glancing at me and kept its body in a horizontal position. This indicated to me that once airborne, it would bank quickly to its right rather than have a high degree of vertical travel.

Let’s have a look at the final three consecutive images from this Pro Capture H run.

You’ll notice that the degree of vertical travel by the subject bird was limited. I had no trouble keeping the entire blackbird in the frame after it took flight.

Now, let’s look at 15 consecutive photographs from another sample Pro Capture H run that were captured using a portrait orientation. Choosing between landscape and portrait Pro Capture runs is dependant on how a photographer anticipates a bird’s flight direction, the size of the bird, and the stability of its launching position.

In our first photograph from our second sample Pro Capture H run we can see the male red winged blackbird is perched on some very thin branches.

Before capturing this image run I watched the subject bird for a couple of minutes as it made its way up from close to the ground by climbing from one thin branch to another. While doing this the bird kept its gaze upward. This was my first clue that in this case, when choosing between landscape versus portrait orientations, the latter would likely win out.

If you compare the EXIF data from this second sample image run to the first one, you’ll notice some subtle differences. I increased my shutter speed to 1/3200 from 1/2500, as well as stopping my lens down slightly from f/5.6 to f/6.3.

I made these changes as I anticipated that the subject bird would be flying in a more direct path towards me so I wanted a bit more depth-of-field. Thus the change in aperture.

Since the blackbird would be taking flight from an unstable perch (i.e. the thin branch) I also knew that it would need to rely more on wing movement than leg power as it lauched into flight. This meant that its wing beats would likely be faster than normal… thus the change in shutter speed.

Once the blackbird reached a thin branch with no other obvious branches with which it could climb higher, I anticipated that it would take flight. It was still glancing upward which indicated to me that the bird would likely have a higher degree of vertical travel once it took flight. These factors helped me decide to use a portrait orientation for this Pro Capture H run.

Let’s have a look at the next four consecutive photographs.

Now let’s view the two ‘money shots’ from the image run, the first of which is my favourite from this Pro Capture H series. Deciding between landscape and portrait orientations is important to capture dramatic wing positions.

Since the blackbird was launching from an unstable perch we can see that has remained in focus as the thin branch flexed slightly backwards as the bird launched. It is important to consider this ‘flex factor’ as it can help hold a bird in focus longer… even when it is flying towards our camera.

Let’s have a look at the remaining 7 consecutive photographs from this Pro Capture H run. As you view these images take note of the degree of vertical travel that the bird makes in the frame. When choosing between landscape and portrait orientations, landscape framing would have resulted in wing clipping for some of the images that follow.

When photographing birds taking flight it is important to consider landscape versus portrait factors to make the most of your photographic opportunities.

Photographs were captured hand-held using camera gear as noted in the EXIF data. Image were produced from RAW files using my standard process. Photographs are displayed as 100% captures without any cropping.

How you can help keep this site advertising free

My intent is to keep this photography blog advertising free. If you enjoyed this article and/or my website and would like to support my work, you can purchase an eBook, or make a modest $10 donation through PayPal. Both are most appreciated. You can use the Donate button below. Larger donations can be made to tom@tomstirr.com through PayPal.

As a reminder to our Canadian readers, you can get a special 5% discount when ordering Tamron or Rokinon lenses and other products directly from the Amplis Store.

Word of mouth is the best form of endorsement. If you like our website please let your friends and associates know about our work. Linking to this site or to specific articles is allowed with proper acknowledgement. Reproducing articles, or any of the images contained in them, on another website or in any social media posting is a Copyright infringement.

Article and images are Copyright 2020 Thomas Stirr. All rights reserved. No use, duplication or adaptation of any kind is allowed without written consent. If you see this article reproduced anywhere else it is an unauthorized and illegal use. Posting comments on offending websites and calling out individuals who steal intellectual property is always appreciated!

This website celebrates the joy of photography and features a wide range of photographic subject matter. The content is designed to appeal to a wide range of people interested in photography. The website also demonstrates the image capability of small sensor cameras including micro four thirds (18 x 13.5 mm), 1" (13.2 x 8.8 mm), and 1/2.3" (6.17 x 4.55 mm) cameras.